The chosen photo is published under the public domain, Creative Commons 0 license by Paul Itkin through unsplash.com. 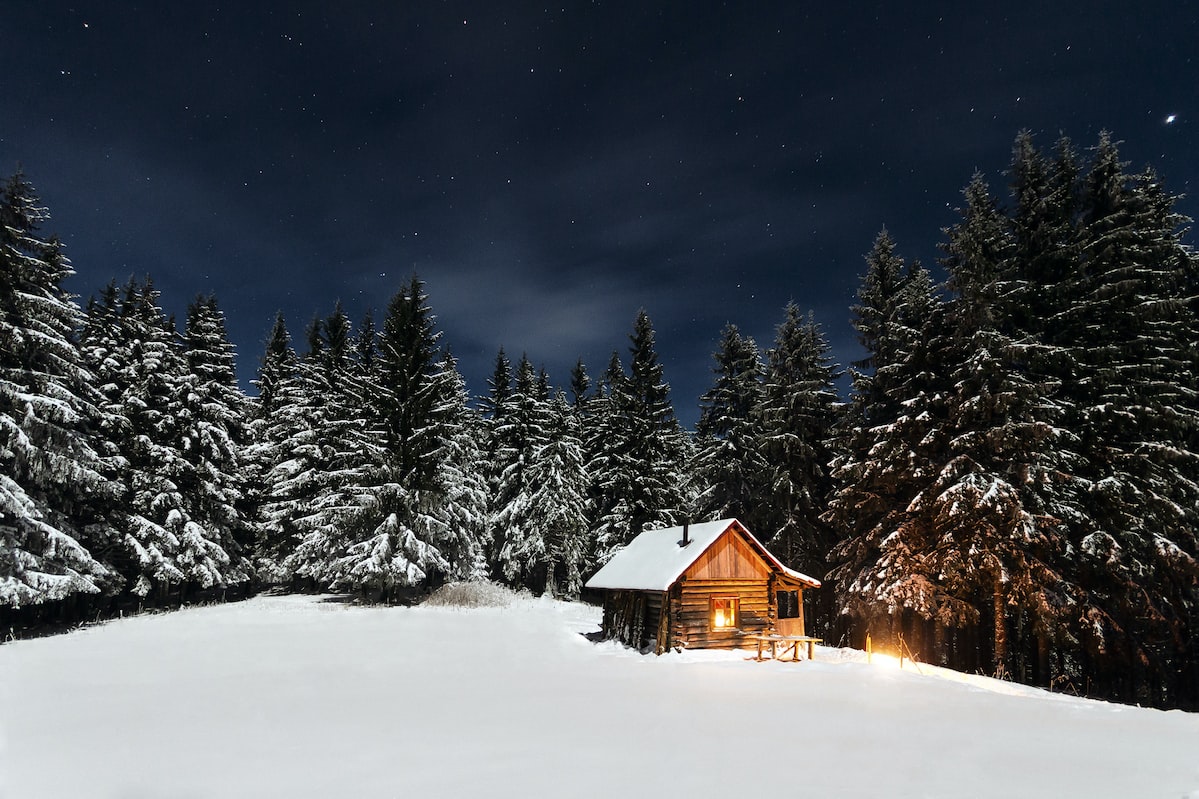 The morning was particularly cold. Roger could feel the air he was breathing prickling in his nostrils. He pulled up the fur, it was from a bear he had killed at least two decades ago, in an effort to keep him warm.

Roger was old. Frankly, he couldn’t remember how old any longer. He simply had stopped counting. His long, white hair had thinned quite a bit during this winter and he had felt increasingly more tired than ever before. His high cheek bones had protruded under his drooping eyes and the clothes had begun to hang on his frail body.

He didn’t feel any pain, though he knew everything was probably not well. Roger was a loner. A hermit. He lived by himself in his small cottage, built by his own hands a long, long time ago. His wife, Flora, had spent her last years in a home. He wanted to take care of her, but he couldn’t. He didn’t have the money, and he didn’t feel the love.

It had been hard at the end. Roger used to say, that the doctors took her away from him. It made it easier for him. But his conscience had a better memory than him, so he knew that it had been the disease. Black spots on her brain had caused her to lose contact with, well, everything. Near the end, she didn’t recognize their children and at she didn’t recognize Roger. They had tried everything. Pictures, photos, music and even reruns of the tv-shows they had used to enjoy together in their house in Sitka. Not even the faintest glimmer of remembrance.

That was when Roger gave up. He gave up on her, packed a bag with some canned foods, bottled water, his toolbox and some clean clothes and drove out into the wilds. It was early fall, and he had had plenty of time to build a basic shack for him to stay in during the winter.

Over the years, the shack had grown. Not much, but enough to add a common room, with a small table, a chair and an old iron stove he had found dumped in the woods on one of his tours around the area in the spring after he had finished his first take on the shack.

Roger had lived here ever since. He had hunted wildlife and caught plenty of fish, collected roots and berries and he soon made what he thought of as a fairly decent living by himself in the Alaskan outback.

This morning, however, he sensed something was, if not wrong then at least a little out of place. He couldn’t decide if it was a smell or if it was an energy that had changed around him. Despite him pulling up the warm bear fur, he couldn’t sleep any longer. He sat up, slowly, he was after all an old man living on his own, and he didn’t want to risk breaking or busting something in his back. He swung his legs over the edge of the wooden bed and put his wrinkly feet down on the boarded floor.

The floor was ice cold to the touch. He shuddered for a second, lifted his feet with a slight grin across his face, before putting them down again. He was a summer person, that was for sure, but he accepted the turn of the year as something inevitable and took the coming of winter as something as inescapable as getting old.

Roger took a deep breath, letting the cold, frosty air fill his lungs before exhaling deeply. “Strange,” he thought, “no breath? Guess the air isn’t that cold anyhow.”
He threw back the fur and heavy blankets. His frail body, closely resembling a skeleton, with a thin layer of grey skin hanging loosely like old sacking on the worn bones.
He slowly got up, and casually noted that his back didn’t hurt today. “Just another curiosity to add to the long list of curiosities”. He smiled at himself.

The long life Roger had lived, had been full of curious incidents. He hadn’t fought in any of the wars, all in all a random event, given that he had been a grownup man during the last two-thirds of the most violent century of modern time. He had made quite a good loving for the family, despite him having no real education – something that would have been impossible for a man born just 30 years later than himself.

He put on his bunny slippers. He made them from rabbits he had caught and skinned many years ago. He also put on a cotton shirt, once white, and took a look in the broken mirror he had hung over his old bucket. It wasn’t an Ikea-solution, but it did the job as a sink.

He splashed some of the very cold water on his face. It brought refreshment instantly, and he started to feel a little better. He stretched his back and felt his bladder croak.

He went towards the door and reached for his coat on the nail in the door frame.

“Bloody ‘ell” he muttered, but he knew he didn’t have the time to look around for it.

As he opened the door, the ice clear winter sunlight blinded him for a brief moment. He stood still, adjusting his eyes to the bright outside, the sun reflected like by a disco ball in the virgin crystals of the night’s snowfall.

It took only a few second. Then he could see. He walked down the small flight of stairs, three steps, and stepped into the cold snow. He could really feel the bladder now, and as the snow was freezing his feet, he needed to skip fast through the snow to reach his outhouse.

He took another step. Then he stopped where he stood.

There were footsteps outside the shack. They lead away from the door.

For a second, Roger forgot what he was on his way to do. He didn’t notice letting himself go, and frankly he didn’t care.

“What’s ‘is?” he asked loudly, as if expecting the tree and the wild animals to answer.
“Did I have company, I di’n’t know of?” he asked, again loudly and unanswered.

The warm beams from the sun made the snow glisten, casting rays of light all around him, as he zigzagged among the naked trees.

He lost track of time. Had he walked for half an hour? An hour? Maybe two? He didn’t care. The tracks lead him further away from the house than he had been for years, but he kept getting drawn towards them.

Roger stepped into a small circle among the trees. Something lay in the center. He stopped on the edge of the clearing, trying to make out what it was. The footsteps lead straight to it. He took a step inside the circle. The intensity of the sunlight seemed stronger. Roger thought that it was probably due to the lack of trees in the circle.

He came closer to the whatever it was in the snow in front of him. He still couldn’t quite make out the details. Something grey, almost white. As he came closer, the light became more intense.

As he took the final step towards the bundle in the center of the circle, he felt almost completely blinded by the light. He reached down, felt the soft touch of stiff hair; the fur of a boar. “Strange” he thought. It wasn’t boar season yet. He grabbed the fur. It was loose. He pulled it off, and felt his heart skip a beat.

As the almost completely white light, too bright to be just the winter sun, completely engulfed him, the pieces fell into place and he suddenly felt light as a feather. He felt warm, at ease, forgiven.

Through the beams of light, he watched as the figure below. He had recognized the face and the coat. And as he ascended into the warm winter light, he could not let his eyes go of the bundle below him. He felt happy. He felt at peace.

The bundle, smiling, eyes turned to the sky, was him.