The chosen photo is published under the public domain, Creative Commons 0 license by Ismael Nieto through unsplash.com. 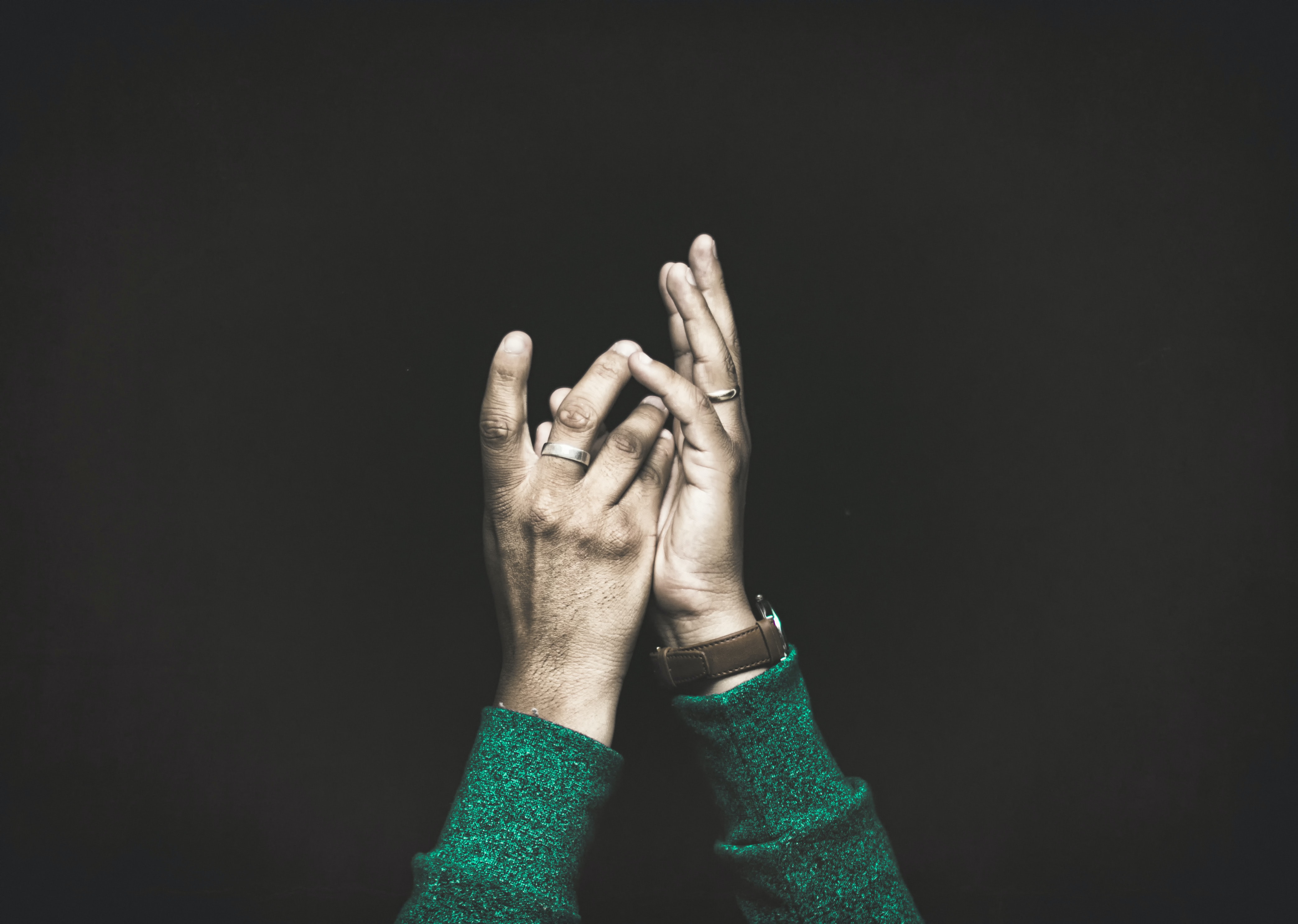 The timid voice woke him up mid-dream. Ben, alone in bed, tried to adjust his vision to the almost complete darkness of the bedroom.
As he laid there, unable to see clearly, he couldn’t help wonder, if he really heard the voice, or if it was just a part of a dream.

That had happened a lot lately.

His therapist, Dr Manley, had said that it was quite normal. Quite expectable, even. It had been stressful times, and the mind reacted to this in strange, often unpredictable ways.

Janet and Ben had split up 2 months ago. At the same time it came as a shock, but in all honesty it was inevitable.

High-school sweet hearts, star quarterback and lead cheerleader, prom king and queen; just that perfect couple all the losers from small-town USA always strived to be. Ben had gone to MIT, following his life-long dream of becoming an electrical engineer. He loved his job. A job, that would always give back just what he put into it. Electronics never did anything of its own. Ben liked this. Janet taught music at middle school. She was a gifted pianist, with a keen ear, able to play almost anything you asked of her, but putting in her own style and soul. And she loved children, and they loved her. She was a feeler, affectionate, and very emotional. In many ways, the diametrical opposite of Ben. But you know what they say, opposites attract.

Yet, they no longer lived together. They hardly spoke, and mostly just texted each other, though not very often. Some would say they grew apart. That was the nice version.

Truth is, they were torn apart. They lost their daughter, Bridget, half a year ago.

Bridget was seven years old, when she disappeared. Ben had taken her to the park to play. It was a beautiful day, not a cloud on the blue sky, and the park was full of people, lot of children and joyous laughter and screams. Bridget had played on the swing set, when Ben headed for the ice cream stand. He must have turned his back to her two, maybe three minutes – no more than three minutes, he always told himself, while standing in line. He had checked his phone, emails, Facebook. Followed an idea for a project at work. Looked at the other people standing in line.

When it was his turn to order, he turned to call Bridget over, but she was no longer there. Panic hit instantaneously. That panic every parent, who has lost a child at the mall, only knows. Bone chilling, spine tingling, nauseating panic. Ben scouted the playground, eyes flinching from left to right, looking for Bridget’s pink dress and long, dark pig tails. Was that her by the monkey bars? In the sandbox? Yes, it was her by the sandbox! Why would she leave the swing set when she knew better?
He half-ran to the sandbox, only to stop a few feet from the edge. The pig tailed girl had turned around. Definitely not Bridget.

Calling the police was easy. Janet not so much. How do you tell your child’s mother that you lost her child?

The police had been very helpful over the next weeks. They had both taken some time off from work. It was hard to focus on anything else for Ben, besides finding Bridget. Janet could not think of anything else but blaming Ben.

The weather had gone cold, the day the police called Ben up. They had found Bridget. She had been strangled and dumped in the woods outside town. Ben had dropped the phone and missed the rest of the call. Janet had immediately known who as calling and why. She had moved out of the house a few weeks later. She couldn’t live with Ben any longer.

Ben had adjusted to the lack of light in his bedroom. He held his breath, listening intensely. Did he imagine things?

There was a light tap on glass. Tap-tap-tap. He was sure of it. He silently pushed the duvet back and stood up out of bed. The cold floor under his soles woke him up a bit further. The sound came again. Tap. Tap-tap. It came from the living room.

Ben walked slowly, warily, down the hallway towards the living room. He didn’t turn on the lights. He kept telling himself he wanted to keep his night sight. But truly, he was too scared.

He peeked slowly around the corner from the hallway into the living room. He could see the door to the garden from where he was standing. He cursed. He had drawn the curtains when he went to bed, something he never did. Why bother, he had nothing worth breaking in to steal.

The small hairs on his neck stood out, a chill running down his spine. He thought the tapping was more determined now. Did the tapper know he was standing there?
He stood on the corner of the hallway for a few moment, not knowing what to do. Should he ignore the tapping? Should he call the police? He could grab a kitchen knife so he could defend himself.

On the other hand, what kind of burglar taps the window multiple times before breaking in? Ben felt foolish. Childish. He turned the corner.

He sneaked slowly towards the garden door, edging along the kitchen table, around the breakfast nook.

Less than 2 feet to the curtain now.

His shaking finger tips took a light hold of the curtain. He held his breath.

As he started pulling the curtain slowly to the side.

Ben shrieked, let go of the curtain and jumped a step back.

The night outside the garden door seemed quiet. The distant muffled roar of planes and trains and cars passing by on the high way off to the east, but nothing unusual.

For a second, Ben just stood there. Was it just a dream? Someone playing tricks on him?

He mustered up all the courage he could find, took a deep, slightly shivering breath, and grabbed firmly around the curtain edge, and yanked it to the side.

For what seemed like forever, he just stood there, eyes fixed on what has beyond the glass in the garden door.

Ben’s brain had suffered a shock. Like had he been struck with a sledgehammer dead between the eyes.

Bridget’s pale, dirty, tiny finger tapped the glass garden door again. Her hair was cluttered with dirt and soil, greasy and clinging to her head with large, bald areas of her head visible underneath.

The skin on her face had swollen, like it had been in water for too long. And yet, it seemed saggy, like too-worn stockings, at the same time. Her ocean-deep, blue eyes had lost their colour and were now just a glossy empty white. Like staring at snowy peaks on a winters night. Her mouth was gaping, like a guppy’s, and though she seemed to be talking, no words left her mouth.

Ben felt her blind gaze pierce through the glass. He sank to his knees, gasped for breath and cuddled up on the floor in front of the garden door, tears slowly streaming from his eyes.

He was awoken by her scream. It cut through his bones and kept ringing in his brain while he slowly opened his eyes.

She was still outside the door. Tapping the glass, mouthing something he couldn’t apprehend. He was absolutely sure he was looking at Bridget, or whatever would have been left of her after months in a coffin. But his rational, scientific mind could not put together the bricks he was laying out. Bridget was dead. Buried. The dead stayed dead. He knew that for a fact.

He sat up on his knees, pushed his sweaty hair back from his face, and took a look at Bridget and fell an instant sting in his heart. The pain felt like a pole of ice being stabbed through his very body, splitting his heart in two. He flinched at the pain, and bent forward in an effort to contain the pain. In his mind, he could hear her voice, crying, asking him. “Why, daddy? Why did you leave me?”. Ben let out a cry as he sobbing fell to his side. “I’m sorry, baby, I’m so sorry”, he cried. “I didn’t leave you. I didn’t mean to. I wanted to protect you! Always!” he fought for his breath between sobs and tears.

He wanted to go back to the park, keep watch of her. Bring her in the queue to the ice cream van, hold her hand and under their breath discuss the weird people surrounding them, making up stories of their men, wives, dogs, children, their castle in the sky or the dragon in their dungeon. He wanted to hold her, spin her around, laughing at the sun, hug her and tell her that he loved her, always and forever.

Now she stood outside his garden door, and he didn’t know what to do.

The mind can be your forgiving partner, and it can be your hateful nemesis. Tonight, Bens dug out memories he had tried to hide for what felt like forever. Janet crying endlessly, rejecting his attempt at holding her; that being the only thing that would console both her and him. Him crying, Janet yelling at him, throwing Bridgets stuffed animals at him through the open door to Bridgets room, blaming him over and over for losing her daughter. Them leaving the coroners officer, Ben trying to put his arms around Janet, but she screamed and pushed him away.

Tears filled his eyes, as Ben tried to look into Bridgets blurry eyes. “I’m sorry, sweetie”, he sobbed. “I’m so, so sorry. Mommy’s not here anymore.”

Maybe he was imagining things, after all he was not sure if Bridget really could be there, but he convinced himself that she stopped her constant tapping and mouthing. Just for a split second.

There was complete silence in the house and ind Ben’s head for that split second.

He must have closed his eyes, maybe to hold back more tears. He was brought back by a loud bang.

Bridget had thrown both her hands surfaces on the glass garden door, and the glass now vibrated with the force she had used. Ben could tell that she was angry.

“Forgive me.” he whispered. “Forgive me for everything.”

He mustered the last bits of physical strength he had left, and raised his right arm. His hand caught the door handle.

His eyes met Bridget’s white pools of nothingness. The pain was more than he could bear. His eyes filled with tears and he gave the door handle a twist and pushed the door open.